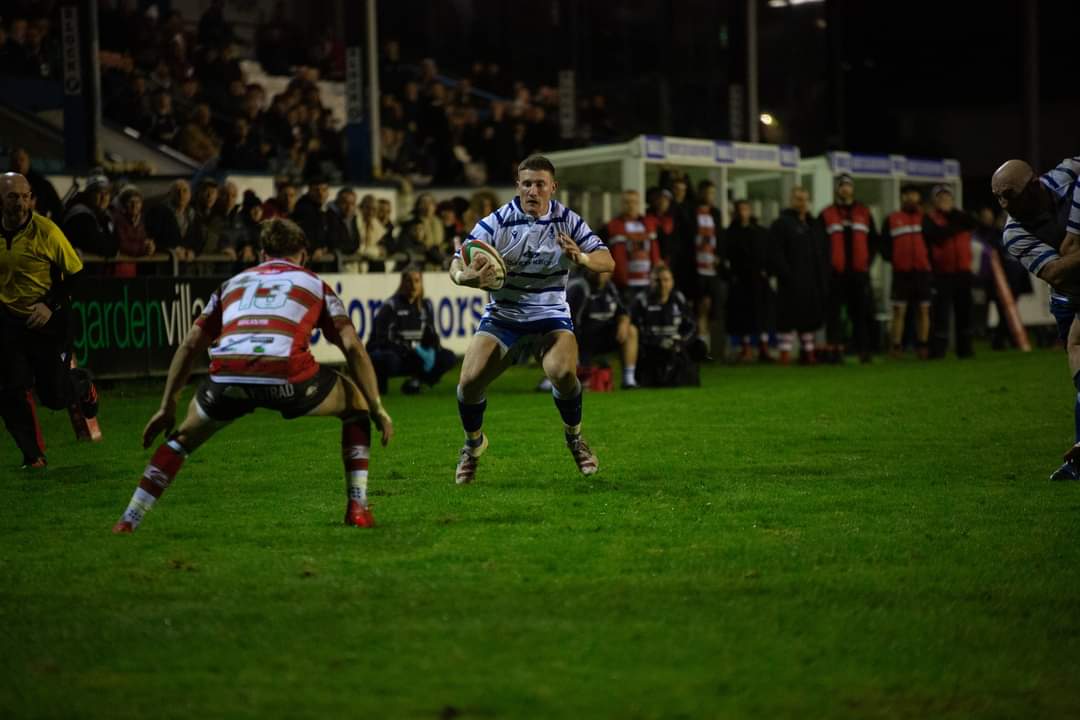 An efficient performance from Llandovery saw them victorious over the Bridgend Ravens with a 27-7 victory.

A clinical first half and excellent work by the Llandovery scrum half, Dafydd Land secured the result for the away side as they strengthened their second place position in the Indigo Group Premiership table. The match also saw Rhodri Jones make a winning 200th appearance for Llandovery.

The scoring started ten minutes in when good kicking skills and pressure from lineouts paid off for Llandovery.

A cross field kick from right to left saw Aaron Warren win an aerial duel and touch down in the corner to make the score 5-0 to Llandovery, after the conversion went wide.

The pressure continued and this time in the 16th minute, Jamie Cox, carried the ball over the line from a maul on his debut.

Again, the conversion was missed from a wide angle to make it 10-0 to Llandovery.

In the 20th minute Llandovery’s second row, Marco Dallavalle, obstructed the ball in a ruck and prevented a try scoring opportunity as Bridgend were just five metres from the try line and looked certain to score. He was sent to the bin for 10 minutes, giving the Ravens a great opportunity to work themselves back into the game. They opted to go to the corner, and the lineout went awry.

After this, both teams were putting in big hits in the tackle but the majority of the game was played in the middle of the pitch. Bridgend plugged away but some sturdy home defence saw Llandovery hold firm.

With the return of a 15th man, Llandovery knocked on the door hard for a third try but some brave defending from the Ravens kept them out.

Just before halftime a smart breakaway saw Dafydd Land score the third try of the game. This was converted by Kristian Jones to make the score 17-0 to Llandovery at half time.

The clinical nature of the first half from Llandovery and solid defending while a man down would prove to be the difference as Bridgend failed to turn the game around in the second period.

The home side came out firing in the second half knowing that they needed the next score to have any chance of winning. Sustained pressure with the game mainly in the Llandovery 22 meant Bridgend’s Chris Williams could dive under the posts after a quick dummy. This was converted by Owen Howe to give his side some hope with plenty of time left for a comeback.

On the hour mark however, Kristian Jones successfully converted a penalty for the away side to make the score 20-7 Llandovery.

The try scoring was rounded off by Llandovery’s Lee Rees after some sharp passing down the right flank. Kristian Jones found the mark with his conversion and his kick was the last meaningful act of the contest.

The win saw Llandovery strengthen their second place position in the group table, whilst Bridgend Ravens, following Swansea’s victory on Saturday slip to fifth place. Next weekend, Bridgend travel to Swansea looking for a win to steal 4th place, with Llandovery welcoming Aberavon to Church Bank to decide who finishes top of the Western conference.