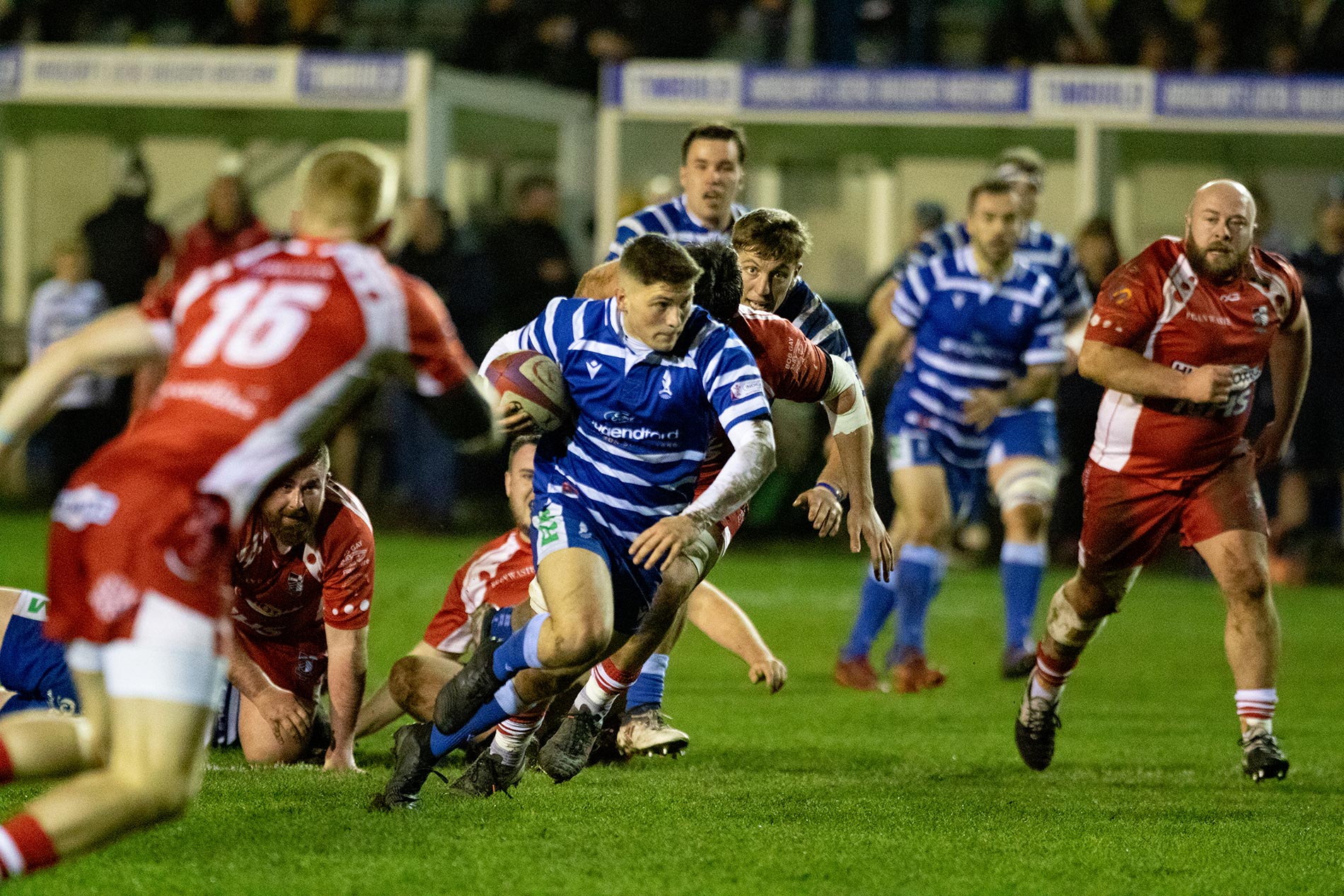 Pontypridd scored nine tries in a comfortable 14-57 victory over Bridgend Ravens at the Timbuild Brewery Field in front of the S4C cameras.

There was a touching moment before the game as both sets of players and fans paid an emotional tribute to a lifelong Bridgend supporter Simon Green with a minute’s applause.

Pontypridd took an early lead through a Dale Stuckey penalty after Bridgend were penalised for offside at the breakdown.

Bridgend put plenty of pressure on Ponty in the early stages, scrum-half Dylan Davies looked lively with several quick darts towards the Ponty line. However, the away side defended strongly to keep them pout.

The away side scored the first try of the game as Bridgend were penalised for a late tackle. Ponty’s driving maul took full advantage of the opportunity with Tom Harper opening their try count. Stuckey put the conversion wide.

The Ravens responded quickly as outside-half Paul Short’s quick feet and a fend opened a gap for him to break through and score under the posts. Short converted his own try.

With the game in the balance Dale Stuckey charged down Owen Howe’s kick, before winning a turnover penalty. Joel Raikes went quickly before being stopped by Joe Gatt, from an offside position. The referee awarded a penalty try and sent Gatt to the sinbin.

Both sides exchanged tries in quick succession shortly after, Stuart Floyd-Ellis scoring for Bridgend followed by Cole Swannack with a chip and chase to extend Ponty’s lead.

Owen howe kicked a penalty from halfway to make it a ten-point game before Ceri Morris scored Ponty’s fifth try to end the half.

The away side started the second period as strong as they finished the first, Joel Raikes scored a try inside the first few minutes.

Swannack who was nuisance for the Ravens defence all game caught his own kick once again before breaking into the Bridgend 22. Ponty had numbers wide, and Garyn Payne was the scorer of their seventh.

Raikes was on hand to set up another when he tapped quickly and kicked down field, Stuckey won the footrace to score in the corner.

Bridgend had chances of their own in the second half however their breakdown troubles continued, and Pontypridd managed to keep them scoreless in the half.

Youngster Jac Davies finished off the scoring for the evening after Dafydd Buckland’s brilliant pass found him space to get Ponty over the 50-point mark.

Bridgend are next in action when they travel to Ciner Glass Stadium, Euguene Cross Park next Saturday to face Ebbw Vale.