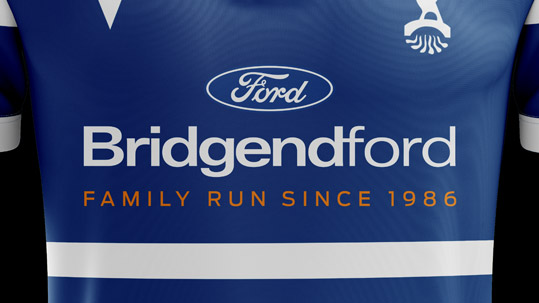 Bridgend Ravens are delighted to announce that Bridgend Ford will continue to be the club’s primary jersey partner for the 2021/22 season.

The iconic Bridgend Ford logo will once again feature on the front of the club’s Home and Away jerseys, having first appeared as primary shirt partner in the Division 1 promotion winning season of 2010-11.

Bridgend Ford, family run since 1986, are one of South Wales’ largest privately owned Ford Main Dealers, operating from a state of the art facility next to the former Ford Engine Plant in Bridgend. They join a number of new partners who have formed new commercial relationships with the club ahead of the new season, with additional partnerships having been announced earlier this week.

Bridgend Ravens Commercial Manager Craig Thomas was delighted to confirm Bridgend Ford’s commitment to the Ravens, commenting, “After such a difficult year for the club with no rugby and a ‘lost’ season, it was heart-warming to be able to pick up the phone to the Bridgend Ford family and immediately get their https://sgs.nsw.edu.au/cialis-online/ support for the season ahead. There wasn’t a moment of hesitation ahead of them re-committing as primary shirt sponsor for the ’21-’22 season.

Repeat sponsorship deals spanning such a sustained period of time (over a decade) are becoming a rare commodity, but Bridgend Ford once again demonstrate their strong family business principles of honesty, loyalty and commitment to the local community. The club are, and will always be, extremely grateful for their support.”

Leon Pesticcio, Bridgend Ford Marketing Manager said, “Bridgend Ford has been a proud supporter and shirt sponsor of Bridgend Rugby since 2010; the main reason for our support being that we strongly believe in showing support for local businesses and the wider community. We love knowing that, in a small way, we have helped future stars of the game to realise their dreams and show the community that anything is possible with hard work and dedication.”

The new 2021/22 Bridgend Ravens jersey will be revealed online, via this website and our social media channels tomorrow.