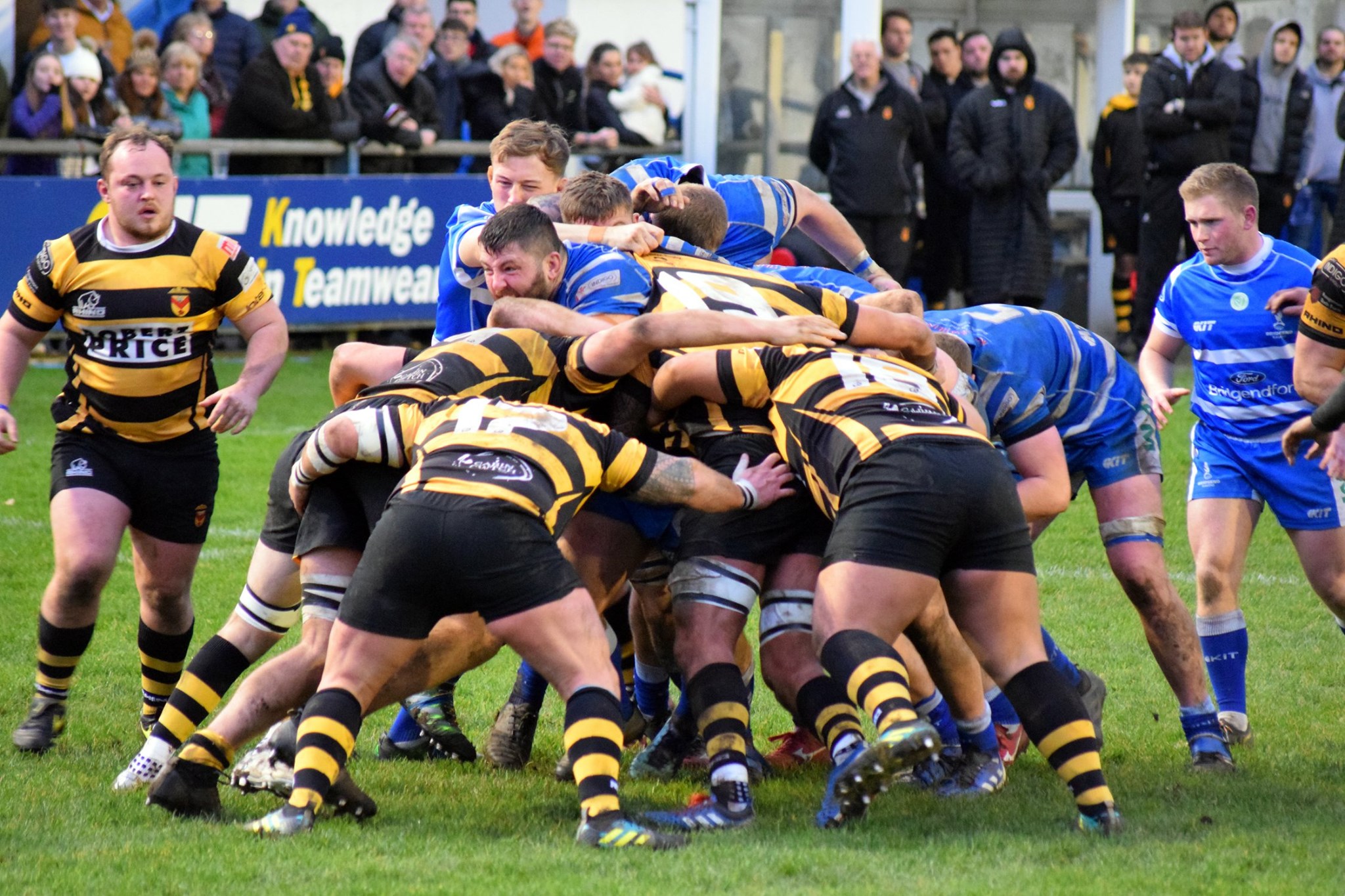 Bridgend Ravens staged a remarkable second half comeback against Newport, only to be pipped to victory by a last minute penalty from Black & Amber hero, Matt O’Brien.

The Morganstone Brewery Field tie was a great advert for the Indigo Premiership and a classic tale of two halves. Bridgend went in at half time with their tails between their legs, trailing by 21pts to 3, but a stunning second half saw them score five tries to come within a whisker of taking five league points from the tie.

It was the visitors who pulled away with a first half blitz, leading by 21 points to 3 at the break. Bridgend struggled at the set piece, both lineouts going astray and scrums being penalised. Newport were afforded far too much good field position and made the Ravens pay.

With just 9 minutes on the clock a penalty try was awarded as Newport rumbled a maul towards the line. Prop Cai Lewis was shown yellow for his infringement.

Owen Howe landed a penalty to get the Ravens on the board but it was to be a long first half as Bridgend didn’t threaten for the remaining 25 first half minutes. Second row Ben Carter and midfielder Jonny Morris touched down as the half went on with Matt O’Brien converting both for an 18 point Newport lead as half time arrived.

Newport looked to have wrapped up the victory with a bonus point try just 6 minutes into the second half, but the Ravens never say die attitude saw the hosts drag themselves upfield, eventually getting themselves back into the game.

Finally gaining some good field position, Bridgend built towards the Black and Amber’s line. Nathan Edwards dummied and managed to spin through a tackle to touch down for the Ravens first try, kick starting a huge fightback effort. Jacob Chilcott landed the conversion.

Just three minutes later the Ravens bagged a second try, and a sublime score it was. Newport cleared loosely allowing Bridgend to counter. Jamie Murphy found Dewi Cross out wide who broke down his wing. Bridgend Athletic products Stuart Floyd-Ellis and Rhodri Apsee both showed sublime quick handling skills to send Chris Williams over for the try. Chilcott’s conversion went agonisingly close, hitting both crossbar and upright before landing on the wrong side of the posts.

Newport stuck back through fly half Matt O’Brien to put a dent in the resurgent Ravens hopes, but back came Bridgend again, where can i buy female https://supremeauctions.com/buy-coreg-online/ viagra looking a totally different team to the first half. Black & Amber indiscipline allowed the home side to march upfield, securing a lineout in the Newport 22, the pack’s maul effort went close but Bridgend played on with penalty advantage where Ben Jones and Nathan Edwards went close before Jamie Murphy’s offload off the floor allowed Dewi Cross to touch down. Chilcott converted.

The Ravens were now flying. Dewi Cross made good ground out wide setting the Ravens up near the Newport 22. Strong carries from Ben Jones, Rhodri Apsee, Morgan Strong and Nathan Edwards edged the Ravens closer. Referee played advantage and Supporters Man Of The Match Jacob Chilcott landed a pinpoint chip to flyer Dewi Cross. The Wing didn’t break stride to gather and round under the posts, Chilcott converted to leave just six points between the sides setting up a nervy final 8 minutes.

As full time approached Bridgend seemed to have completed the unlikeliest of comebacks. Power up front first at the scrum then at the lineout saw Bridgend win back to back penalties. Chilcott nailed the corner seeing Bridgend set up a huge five metre maul effort. The pack got their reward for their late work, their immense effort earning a penalty try which saw Newport replacement Henry Palmer sent to the bin. The automatic seven pointer was enough to edge the Ravens into a 1 point lead but there was time for the restart.

Bridgend will be disappointed not to have gathered the short kick off, as Newport stole much needed possession with the clock in the red. Multiple phases saw a solid Ravens defensive set, with the hosts not conceding an inch. As referee waved ball out Bridgend pounced looking to secure possession however referee Rhys Jones penalised the Ravens for diving on the ball handing Matt O’Brien the chance to down Bridgend with the last kick of the game.

The fly half, excellent all afternoon from the tee, nailed the 40 metre penalty to break Ravens hearts having fought back so well throughout the second half.

It was two league points instead of five for Bridgend who’s second half effort secured two bonus points in defeat to put them two points above bottom placed Ebbw Vale in the current league standings.

Bridgend will look to back up a positive second half showing when they head to Merthyr next Saturday in the latest round of Indigo Premiership matches.